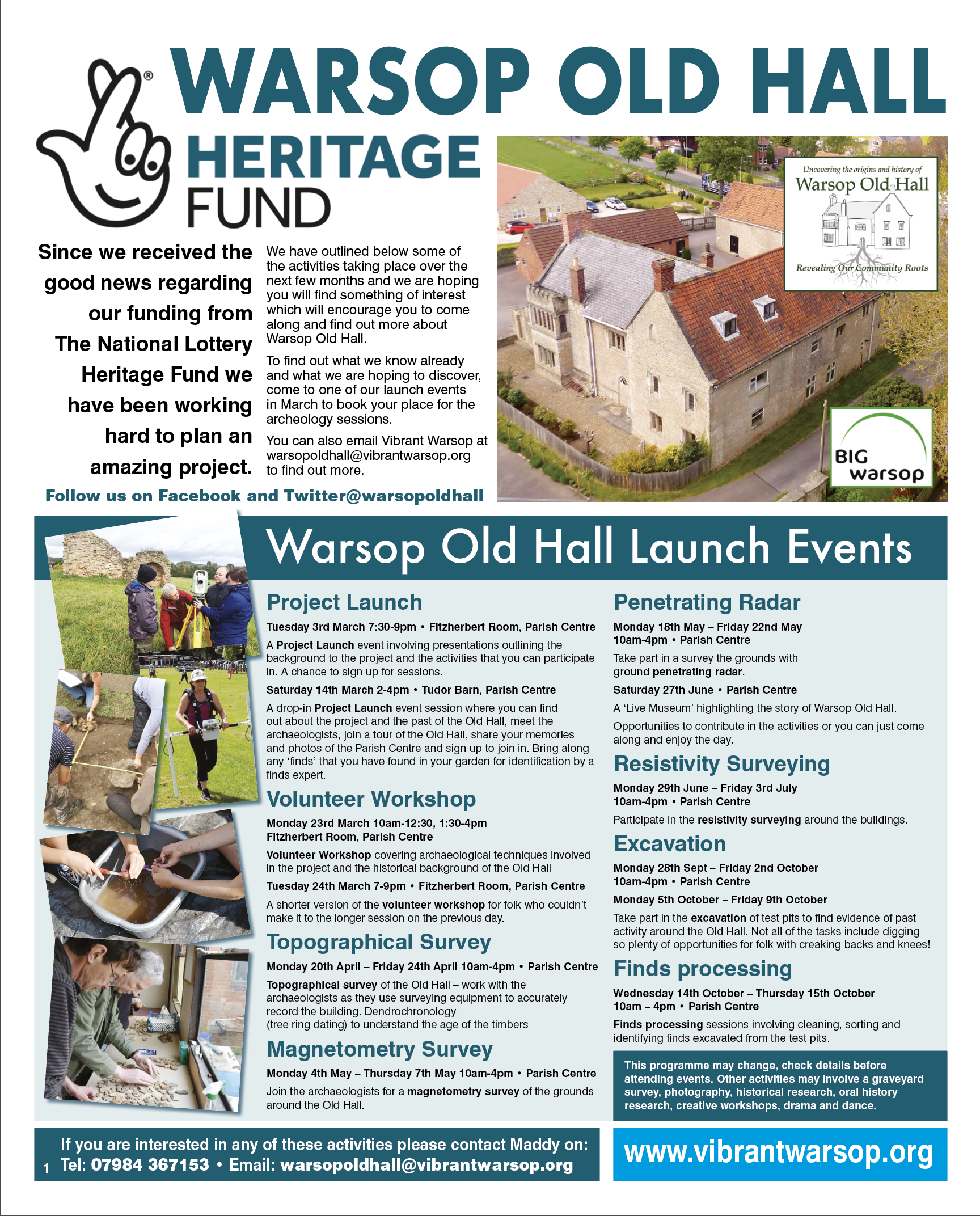 Our Christmas Market is just over 4 weeks away!

The Blessing of The Oaklands Memory Garden

unity Project works in communities across the North East Midlands and Yorkshire to support people with problems and crises and to strengthen communities.  At each of its support centres, Freedom offers a free drop-in cafe, support services (including benefit issues, debt and housing problems) and volunteering opportunities.  They also offer specialist support for mental health issues and to those affected by domestic violence.  In addition, Freedom runs social events throughout the year that bring the community together.

To find out more about the Freedom Community Project, visit www.fcgroup.org.uk.

Maddy Pritchard from the Vibrant team, says:
“It s eems that for Warsop’s parade of Remembrance on the 11th November, we have no band to support the parade. The Parish Council did have this covered, however the band booked has now unfortunately cancelled.
This is a call out to all musicians, ex Boys’ or Girls’ Brigade members. We would like to put a band together for the parade and believe that if enough people come together we can put something together over the next couple of weeks in order to support this event with drums, bell lyre and valved trumpets.”
Please contact Maddy@vibrantwarsop.org or on 07984 367153 if you are able to support in any way.
Thank you in anticipation of your support.

A Celebration of Creativity at Warsop Fun Palace

The Shed was awash with colour and noise on Sunday 7th October as the community came together for Warsop’s first ever Fun Palace!

un Palaces weekend.  These annual free events are run by local people for local people, and celebrate culture at the heart of our communities.

The Vibrant Warsop team coordinated the event as part of their Strengthening Communities work funded by Big Warsop.  Groups who offered their skills and expertise at the Fun Palace included Warsop Scouts, Ecologic, Warsop Footpaths Group and the Rotherham African Drummers.  Local volunteers also shared their skills in cake decorating, jewellery making, card making and apple pressing amongst other activities.

Event Coordinator, Mike Payne, said, “We set out to bring fun, creativity and colour to The Shed and reveal the creativity and skills which lie hidden within Warsop – well, we certainly did that! We had graffiti art on the walls, African and snare drumming, giant bubble and slime making, guitar and ukulele playing, arts and craft and heritage stalls, making cards and jewellery, a games area and model trains, apple press, lighting fires, decorating cakes and building bird boxes and eating lovely food and loads of people generally having a really Fab time. Looks like we’ll be having a Fun Palace next year!”

In addition to bringing the Fun Palace back to The Shed in 2019, Vibrant Warsop is planning to bring out the creativity in Warsop through new art and music groups and community activities.  If you would be interested in joining an art group (painting), a drumming group or a music/singing group – or if there is another creative activity you would like to be able to access in Warsop – Vibrant would like to hear from you.  Please email maddy@vibrantwarsop.org or call Maddy on 07984 367153.

Fun Palace to Celebrate Creativity in our Community

A very special event is coming to Warsop this autumn. For one day only, The Shed will be transformed into the Warsop Fun Palace!

In celebration of the culture and creativity in our community, individuals and groups will come together on 7th October to share their skills and passion for art, crafts, music, dance, science, sports activities, nature and heritage – all under one roof!

Fun Palaces will take place nationwide during the first weekend of October.  These free events are run by local people for local people, and celebrate cultu re at the heart of our communities.  The Warsop Fun Palace is being coordinated by the team at Vibrant Warsop who are lining up an exciting and diverse programme of activities for the day.  A variety of artists, musicians, teachers and performers will be sharing their skills with others.  From mad science experiments to wall graffiti, from karate to knitting, from ukulele-playing to drumming – there will be something for everyone of all ages and abilities to try out and get involved in

Event Co-ordinator, Mike Payne says, “Bringing fun, creativity and colour to The Shed, this free event will reveal the creativity and skills which lie hidden within Warsop.  Everyone is an artist and everyone is a scientist at our first ever Fun Palace!”

All are welcome to join in the fun from 11am to 3pm on Sunday 7th October at The Shed just off Wood Street in Market Warsop.  Hot food and hot and cold drinks will be available at affordable prices.

Keep an eye out for more information on the Vibrant Warsop Facebook page. Last year’s event was attended by over 800 people who enjoyed the chance to buy Christmas gifts and crafts, visit Santa’s Grotto and hear performances from local school choirs.  This year, visitors will enjoy the same festive atmosphere, with a fantastic range of market and craft stalls, fairground rides, school performances and, of course, a visit from Santa!

To reserve your stall please complete and return a booking form together with your payment to Vibrant Warsop or to reception at Warsop Town Hall.

Another Successful Year for Warsop Carnival

On a day which saw temperatures soar, thousands of people headed to the Carrs showground for the annual Warsop Carnival.

The day’s entertainment started earlier than planned due to the exceptional heat, with the marching band competition starting at 11am. Out of the 6 bands competing, there were 3 winners:

The Parade was judged at 11.30am at Costcutter Swallows, before setting off on the mile and a half journey to the Carrs Showground.  The Parade winners were:

The dog show – which included 10 categories – was a popular spectacle later in the day, as was the adults’ 5-a-side football tournament.  Four teams entered and it was a penalty shootout showdown which ended with the “Crates and Grapes/Wine Bar” being crowned the winning team just ahead of “The Talbot” who came 2nd.

his and a range of other children’s activities throughout the day.  One of the most popular attractions was the mobile beach area which the Carnival team decided to put under a marquee due to the heat. Families enjoyed the sandpit and many adults also enjoyed having some shaded area along with a beer or two from the bar which was provided this year by the Plough Inn.

People also enjoyed admiring a couple of classic cars which were showcased on the day, as well as the extremely popular annual flower tent and duck race.

Over on the music stage, Nigel Pinnick started the day off with a “Best of British” themed DJ slot followed shortly after by Charlie Starr who peformed some “Best of British” classics before coming back on stage as an incredible tribute to the late Amy Winehouse. Once Charlie had peformed as Amy Winehouse, the Carnival Chair (Luke Spence) took to the stage to reveal the results of the Warsop Carnival raffle which had over 20 prizes donated by local businesses and individuals. Once the raffle was complete, the brilliant “Ed Sheeran Experience” then took to the stage.

As always, the Warsop Carnival was organised by a group of volunteers.  The committee would like to welcome new members to assist with helping out either prior to the day or on the day itself. If anyone would like to join the committee, please either email warsopcarnival@yahoo.co.uk or phone Luke on 07552219947.

The Vikings Are Coming !